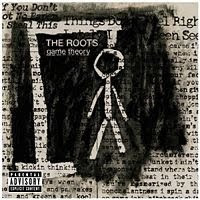 I was kinda torn here. At first I thought of going with a song by Mint Condition or Klymaxx for this one. But then I figured I’d go with the band that had the most music in my itunes and so we have The Roots. I listen to them more than any other band (as in a group of people that play instruments and shit) so it seems I went in a huge circle just to end up where I started. Anyways “False Media” is the first song on my favorite Roots album, “Game Theory”. The song is dark. Hell the album is dark and gritty for that matter. But this song is the perfect opener for such an album. It’s defiant. It’s hard-hitting. It’s in your face and you cant deny it. Listen as Black Thought starts rapping from the perspective of a man with nothing to lose, then as a soldier fighting in a war of which he knows not the origin of, and finally as Big Brother. Shit is dope. Take a listen. I gotta warn you though….it’ll make you wanna overthrow the government.
Posted by Teej at 2:48 PM