A group of facebook friends and I have decided to flex our artistic muscle and commit to writing 30 pieces (of anything) in 30 days.

As Told To Me By A Friend.....(Evolution/Revolution)

"So happy you got fired. When it comes to my artist friends being in 9 to 5's they despise, I like to tell them it's about revolution, not evolution. We keep waiting for things to change, evolution. But without Revolution, that change could take forever. Take this time to make your situation better!"

Makes all the sense in the world. Thanks Sant!

Labels: Epiphany, Life, Props, Quotes I Like, Self Help

Peace to my girl Sivi who passed this along to me in one of her famous email forwards. 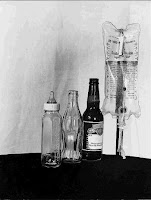 God bless that 3rd bottle. Imma be on that bitch til it's time for the 4th and even while Im on the 4th.

While taping an episode of "The First 48", Detroit police raid the wrong goddamn house and shoot & kill a 7 year old girl asleep on the couch. Now (not surprisingly) they are trying to suppress the video footage.

gresses", shit will never be sweet! They just don't value our lives.

God bless Aiyana and her family.

Sign the petition to have the video released here.

1. "We all know sometimes life's hates and troubles/ can make you wish you were born in another time and space/ But you can bet your life times that and twice its double/ that God knew exactly where she wanted you to be place..." - Stevie Wonder "As"

3. Thanks to Angie and Nyree who kept pushing me to write something....anything.

4. Also shouts out to Les, Lor, Kristin and Andrea who got the listing ball rolling again with our email chain.

8. Call me crazy....but I do kinda miss the myspace hey day

9. Something about it wasn't as wide open and out of control as this twitter/facebook age

10. "(Stevie Wonder's) "Songs in the Key of Life" is a healing Masterwork." - dream hampton

11. If you don't have a copy of "Songs In The Key Of Life" I suggest you get one. It really has answers to just about all of life's problems. Seriously it does!

11. Maybe when I officially become a cool writer type I'll go ahead and switch my name to all lower cases. Only the coolest scribes (i.e. bell hooks and dream hampton) do that.

12. Anyone especially surprised that BP has been lying to us this whole time about the intensity of the oil spill? Anyone? Anyone? Bueller?

13. Nowadays I have a 'wait and see' attitude about most things. Nothing is ever what they initially say it is.

14. Sometimes I think I have such an unorthodox view of death. It's really not a sad occasion to me. Hard to explain. Definitely no means to jump for joy but I'm not overwhelmed with sadness most times

15. The soul remains alive. I truly believe that just the physical shell expires. The spirit of that person is still there.

16. I have a great-uncle hanging on by a thread right now and I'm dreading sitting through a sad sad funeral.

17. The whole viewing of the body thing I never do. Funerals in general are pretty damn morbid to me.

18. "Hard to be a spiritual being when shit is shaking what you believe in" - Talib Kweli "Respiration"

20. ......and no it wasn't (as we all thought it would be) for finally hauling off and cussing out a dumb guest

21. Instead I got fired for being late when I told the mgr a month prior to the actual day that I would be late on this particular day b/c I was working a tv production

22. Oh and I also got in trouble for not speaking with a mgr the day of (when I called in to inform them (again) that I would be late that day)......even though there was no manager there when I called

23. To keep it completely 100 though....dude did me a favor by firing me. I didn't need to be there anymore. That place was completely sucking the soul out of me.

24. I'll miss the consistent money though.

25. I wonder why said ex-manager obviously hated me so much as to try to deny me the little money owed to me on my last check and block my unemployment?

26. What kinda unwarranted kick in the nuts is that? I mean it's not like when he fired me I cussed him out, threatened his life and tore the hotel up or anything. I didn't even get "ethnic" or give my speech on who was cool and who could kiss the center of my ass. I was pretty calm if you ask me.

27. No worries though. Im #ontothenext and living my life now. Thanks Mr. Jimenez!

29. Superior Media Group is the spaceship that I will be making sure takes off btw.....in case you ain't know

31. Plus I have sooooo many inspiring friends doing their own thing. We are 'Revolutionary Entrepreneurs' for real!

32. The Cavs really disappointed me. I thought this was their year. LeBron doesn't seem to have that killer instinct yet

33. My dude if you're the best player/leader of your team AND league MVP.....if yall gon lose Imma need you take over the game at some point. I know you wanna get your teammates involved and not be accused of being selfish, but at certain times Mr. MVP you gotta throw the team on your back and THUG your way through close games. Mike did it. Kobe does it. Where you at 'Bron?

34. It's gon be an interesting off-season to say the least with LeBron, D-Wade, Melo, Chris Bosh, etc. all free to roam

36. I swear I need to write this on post-it notes and hang it all over my place

38. Now if I can only keep up with that proclamation......that's like the 50-leventh time I dun said that

40. Like what in the mildly retarded hell do you have to talk about dude?

41. What....you thought you was a political prisoner or something?

43. "Yes I got some candy kisses for your lips/ Yes I got some honey suckle chocolate dripping kisses full of love for you" - Stevie Wonder "Do I Do"

44. The fact that we went back and forth strictly speaking in Stevie song titles.......lol

47. I love Mary J.....but her starring in a Nina Simone biopic concerns me. *crosses fingers*

48. Then again when I got word that Common was the lead in this "Just Wright" movie I was concerned as well......(and yall bet not let me feel like I was the only one)....but thankfully all the feedback I've heard thus far suggests that it's not the worst movie ever made so.....

Today is the 60th birthday of my favorite musician of all-time, Stevie Wonder! If you have just a pinch, ounce, and smidgen of soul within you, you have to have a favorite Stevie song. If anyone tells me that they dont do I will be forced to thrash you. Seriously.

Today is also the 25th anniversary of MOVE house bombing in Philly.

Sort of a bittersweet day to say the least.

P.S. How you them apples 'ree?